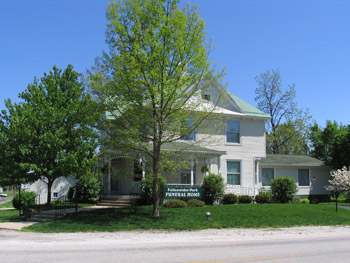 The first established funeral business in Mechanicsburg that can be established by records was started in 1916 by Jacob T. Fullenwider and his nephew John E. Fullenwider. The “Undertaking” business as it was known then was located on First Cross and Main Streets. This was a frame building and divided into four separate buildings; three facing the east on First Cross St. and one on the corner of Main St. with the entrance on the south. The “Undertaker’s” place was situated on the first door north from the corner of Main in front, on the west side of the street. This “row” of buildings was burned in the winter of December 1929.

As funerals were mostly conducted from the family home of the deceased or from the churches, there were very few established funeral homes anywhere…even the bodies were prepared within the family home. The first licensed embalmer was John Rogers. Jake Smith drove the horse drawn hearse until the death of J.T. Fullenwider.

After the fire, the next place was in what was then known as “old Dunway’s house”, formerly the home of Mrs. Hattie Cole; now the home of the Charles Sexton family. A display room for caskets was in the old R.A. Farmer Building, where Booker Furniture store is now located. Later they moved from downtown into the “old Burcham home”, east on Main St. between Third and Fourth Streets. About 1943, the Fullenwider Funeral Home was permanently established in their dwelling on the southeast corner of Church and South Streets.

Mr. John E., Fullenwider passed away July 4, 1955. John Patton Fullenwider, son of the late John E., assumed the business at the time; he still conducts the business in the family tradition at the same location.

John Patton Fullenwider continued to run this business until his retirement in the Fall of 1989, when the business was purchased by Greg Park and Wilson J. Park of the Wilson Park Funeral Home in Rochester. Mr. Fullenwider passed away on February 3, 1992.

We intend to continue the tradition of service given by the Fullenwider Funeral Home with the same concern and integrity that characterizes John “Pat” Fullenwider. He has given many years of devoted and appreciated service to the Tri-City community.